PITTSBURGH, PA - SEPTEMBER 15: Ben Roethlisberger #7 of the Pittsburgh Steelers in action against the Seattle Seahawks on September 15, 2019 at Heinz Field in Pittsburgh, Pennsylvania. (Photo by Justin K. Aller/Getty Images)

We are proud to announce that we’ve received a grant from the Ben Roethlisberger Foundation to support our K-9 unit! Read official press release here:

The Los Angeles Police Department will use the grant funds to add a dog to their current unit of 24 canines.

During the 2019 NFL season, The Ben Roethlisberger Foundation will be distributing grants to K-9 units of police and fire departments in the cities and surrounding communities of each regular season away game for the Steelers. The Foundation will also distribute several grants to the Pittsburgh area. The Ben Roethlisberger Foundation invited police and fire departments across the country to submit proposals detailing their needs.

The Ben Roethlisberger Foundation distributed more than $145,000 in grants to K-9 units around the country during the 2018 NFL season, including $70,000 in Pittsburgh and surrounding areas. The Foundation has distributed in excess of $2.1 million since 2007, $1.7 million of which has specifically benefited K-9 programs domestically.

Los Angeles Police Sergeant Scott Davis said, “K-9 Platoon is an indispensable tool for the Los Angeles Police Department. K-9 Platoon conducts over 300 searches a year for felony suspects actively evading apprehension. K-9 Platoon tactics de-escalate tactical situations, preserve human life, reduce the intensity of tense encounters with violent, armed suspects and mitigate the need for a higher level of force. The City of Los Angeles does not purchase any canines for the unit. All canines are procured through private donations at the cost of approximately $10,000 each.”

In commenting on why the mission of the foundation is so important to him, Roethlisberger said, “We’re very fortunate to be in the position that we are able to help these K-9 units. The work that is performed by the dogs and their handlers as well as the bond that is formed is incredible. We’re just thrilled to do our small part.”

For more information about the Ben Roethlisberger Foundation or The Giving Back Fund, please contact Jessica Duffaut or visit www.bigben7.com or www.givingback.org. 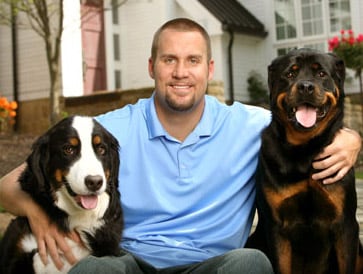 Ben Roethlisberger is in his 16th season as quarterback for the Pittsburgh Steelers. At 6-foot-5 and 255 pounds, he is aptly referred to as Big Ben, and has become known for big performances and humble approach. Roethlisberger is one of only 12 starting quarterbacks to win two or more Super Bowls. In 2009, he led the Steelers to a 27-23 victory over the Arizona Cardinals in Tampa with a thrilling touchdown pass in the final seconds. In 2006, Roethlisberger became the youngest starting quarterback to win a Super Bowl, defeating the Seattle Seahawks 21-10 in Detroit. Roethlisberger earned his fourth consecutive Pro Bowl selection in 2018 and his 7th overall (2007, 2011, 2014-18), and already holds most of the passing records for the Steelers. He is the only quarterback to lead his team to the conference championship game in each of his first two seasons. He was the unanimous Rookie of the Year in 2004, breaking Dan Marino’s rookie records for completion percentage and passer rating, and was the first quarterback in NFL history to compile a 13-0 regular season record as a rookie.

Roethlisberger was raised in Findlay, Ohio and was a three-sport star at Findlay High School. He went on to set nearly every quarterback record at Miami University (Ohio) prior to foregoing his senior season and becoming the 11th overall pick by the Pittsburgh Steelers in the 2004 NFL Draft. Roethlisberger resides near Pittsburgh with his wife Ashley, daughter Baylee, sons Benjamin and Bodie, and dogs Remy and Kota.

About The Giving Back Fund